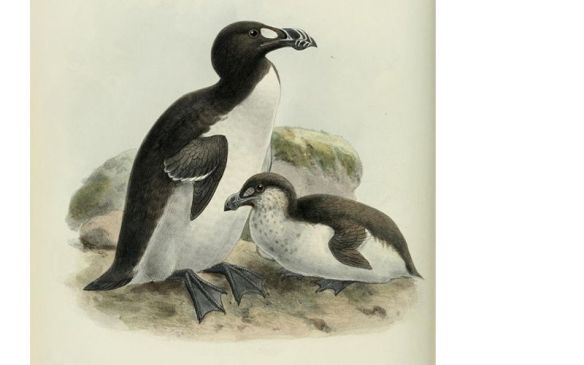 I read once that scientists estimate that 99% of species that have ever lived on Earth are currently extinct. We’re talking billions and billions of animal species that once lived here and no longer do.  It’s actually a staggering number to try and comprehend, and my mind runs wild thinking of all the animals that used to gallop and fly and slither through my own backyard.

As a planet, we’ve gone through five major extinctions, each caused by  some sort of natural phenomenon like volcanic eruptions or the normal cyclical shift of climate, and each responsible for completely wiping out between 75-80% of life on Earth.

Most of us have at least a working understanding of the Cretaceous-Tertiary or K-T extinction (also known as the Cretaceous-Paleogene (K-Pg) extinction) – or, in layman’s terms: The Thing That Killed All the Dinosaurs.   Not to be a Debbie Downer, but our planet is currently in the midst of the sixth great extinction, and this time species are disappearing at up to 1,000 the rate as we’ve seen over the past half billion years.  This time, it’s not a rogue asteroid or some sort of polar shift that’s causing it – it’s us. Mankind has spent the last few centuries rapidly depleting natural habitats and hunting animals to the brink of non-existence.

A hundred and fifty years ago, there were woodland bison roaming West Virginia, passenger pigeons were one of the most abundant birds in the world, and monk seals thrived in the Caribbean Sea. Humans changed all of that, just like they changed the natural course of the Great Auk, a flightless bird that had coexisted with humans for 100,000 years.

Auks look similar to penguins and share several characteristics with them, although they aren’t closely related in terms of biology. There is evidence that they were an important part of the Neanderthal-era diet of North American people; their likeness has been found in Paleolithic-era caves.

Once numbering in the millions, the Great Auk was prized first for its down, which were used to make pillows, and then for its meat, fat, and eggs. Despite its name the Auk wasn’t exceptionally large – at under three feet, it was easily susceptible to larger enemies in the cold waters where it made its habitat.  Graceful in the water, the birds struggled to protect themselves on land, where it came to breed. As its numbers dwindled, its value went up.

The last known Great Auk in British waters was killed in 1840. The solitary bird was found on the island of St. Kilda off the Scottish coast and captured by sailors, who called it a “garefowl,” and brought it with them on their ship, bound at the arms and legs. Four days into their voyage, a storm spring up. The men attributed their bad luck to the presence of the bird,  so they stoned and beat it until it was dead.  Not only was this an act of cruelty, but also seemingly against traditional maritime superstition about the killing of birds.

The very last of a dying species, two adult Auks lived on a small rock island off the coast of Iceland called Eldey. Once part of a colony of at least fifty, these sole survivors – one male, one female, had managed to reproduce a single egg, which they were incubating against all odds.  Under the auspice of collecting skins for museum display, a merchant ordered their deaths. The adult birds were strangled to death, and, perhaps most heartbreaking: the egg was stepped on and smashed.

While the Great Auk lives on in the form of specimens, cave paintings, and the namesake of the American Ornithological Society’s newsletter, it’s also possible that we’ll see an actual Auks reintroduced to the planet. An American research institute is looking to Jurassic Park them right back into existence using DNA from preserved organs.

As of now, the process is still in the discussion stage, so it’s unlikely that we’ll see the birds make a comeback in our lifetime.