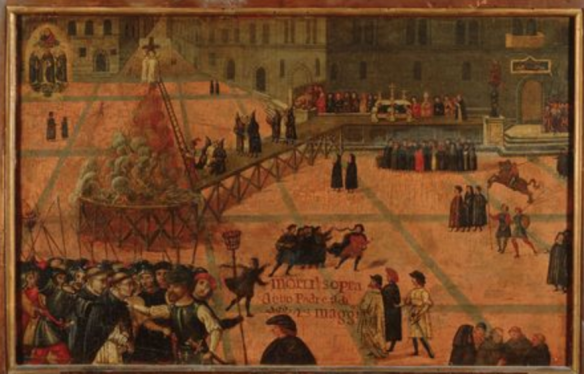 Florence, Italy must have been a fascinating place to be in the 15th century.  In the century after the bubonic plague ravished most of Europe and decimated its population, Florence had become the birthplace for a new way of life that we now refer to as the Renaissance –  meaning “the rebirth.” Art and leisure became prioritized over simple survival, humanistic ideals and a healthy dose of skepticism began to mix with traditional church teachings, and scholars turned back to the classic philosophies of Greece and Rome as a model for an educated and introspective society.

It’s impossible to point to a single cause for this paradigm shift in European life, but we can come up with a virtual laundry list of possibilities. The plague changed every aspect of European life and destroyed the old feudal systems that dominated not only economics but social strata as well.  The Church found itself with a shortage of priests and a population that questioned how their God could have allowed such suffering.  Perhaps the notion of just how brief and fragile life really is caused people to look more towards seeking pleasure during their time here instead of just pining for the ethereal sort.

Regardless, these Renaissance ideals would eventually bring the modern world things like the Protestant Reformation, European exploration and colonization, and the scientific breakthroughs that formed the foundation for modern medicine. But not quite yet – in 1497 we’re still faced with an identity crisis between religion and humanity.

Italy was geographically poised to be the first to usher in the new dawn; their location along Mediterranean trade routes allowed them to be the first to receive both new materials and new ideas. They were also firmly under the thumb of wealthy ruling families, particularly the Borgias and the Medicis, and had been for quite some time. Powerful, connected, and often ruthless, the Medicis were patrons to budding artists, bankers, politicians, and even popes. Their influence reached into almost every aspect of Florentine life during the Renaissance and beyond.

The Medici family often called the shots when it came to deciding who would be awarded certain societal benefits as well. One such darling of the family, at least early on, was a Dominican Friar named Girolamo Savonarola.

To say that Savonarola wasn’t a fan of the secular ideals of the Renaissance would be an understatement. He spent most of his ordained career preaching repentance and urging people to return to the church. In 1490, under the influence of Medici family member Lorenzo the Magnificent, he came to Florence. He attracted a group of followers who clung to his urgings to cleanse Italy of corruption – both within the ruling class and the religious class. His words often incited political reform in their wake, changing aspects of Florentine society to become more modest and demure.

Along with his boisterous preaching, Savonrola claimed the capability to perform miracles and to experience religious visions, and a cult of personality formed around him and his message. Unfortunately for the monk, his message directly threatened the power of the corrupt church, and it’s supporters – the Medici family being first and foremost.

In February of 1497, while Florence was preparing for its pre-Lenten carnivale, Savonarola and his followers were preparing for a different sort of event – a massive bonfire where they would burn anything seen as too secular or wanton – books, make-up, artwork, musical instruments, and anything remotely related to astrology or paganism. The influence that Savonarola and his followers had was so far reaching that even Renaissance artist Sandro Botticelli is rumored to have added his own sketches and painting of scantily clad mythological figures into the inferno. It was a Bonfire of the Vanities – a literal and figurative decimation of Renaissance ideals. It’s impossible to know what invaluable pieces of art and literature were taken from the world that day, before their value was even realized.

Despite his almost cult-like following, Savonarola made enemies as well – and some of his enemies were very powerful. Citing the influence that Savonarola had on policies in Florence, Pope Alexander VI (a Borgia) excommunicated him. Public opinion turned against him when a challenge to prove his divinity by walking through fire fizzled out and angered the crowd who had been waiting to see him (or a surrogate) attempt the feat.

Soon after, Savonarola was arrested, tortured, and forced to recant his anti-Church sentiment. He was declared a heretic and burned after being hanged on a cross in Florence’s town square in 1494. Perhaps it was his own vanities — his boasting of miracle work, the delight in seeing his followers wail at his feet, the showboating of the failed fire walk — that led to his demise as well.

Still, his influence lives on. His manuscripts on church corruption – those that survived – went on to inspire Martin Luther’s own thoughts on church reform and led to the Protestant Reformation several decades later.